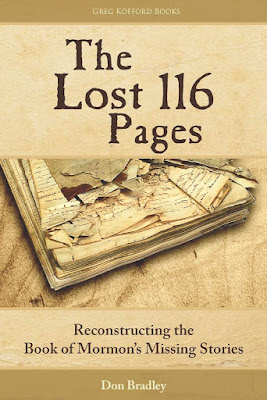 Mormonism is a young religious movement. Perhaps our most prominent mystery is what's in the missing 116 pages of The Book of Mormon. The story, told so often: Transcriber Martin Harris pesters Joseph Smith to let him take a stack of translated pages to assuage his skeptical wife, Lucy. Once he has the pages, Harris loses them. The Lord rebukes Smith and Harris, and because of that, we have a shorter Book of Mormon.

The lost 116 pages is a sort of Holy Grail-mystery for many of the LDS faithful. What's in it, we wonder. Don Bradley, a prominent Latter-day Saint historian, has tackled the task of interpreting the timeline and what may indeed be in those lost pages. "The Lost 116 Pages: Reconstructing the Book of Mormon's Missing Stories," Greg Kofford Books, Salt Lake City, 2019, is not an easy read. It's a scholarly work, and moves at a slow, deliberate, very detailed pace. It can be a slog at times, but it is ultimately rewarding.

I don't want this to be too much of a spoiler review, revealing to readers what is undoubtedly the most important part for many: what's in those lost pages, according to Bradley. A few tidbits of what is offered: The author's research leads him to opine that the Lost Pages are a narrative-heavy version of the time of Lehi and family in Jerusalem through the early chapters of Mosiah.

Bradley believes that the annual Passover observance coincides with the exodus from Jerusalem and the eventual possession by Nephi of the Brass Plates. Also, he believes that Lehi's followers constructed a movable temple during their journey. Readers may guess correctly that short accounts in the Book of Mormon, after the Book of Jacob, are opined to possess more detail in the Lost Pages. Topics include internal apostasy and more detail on a character named Aminadi, described as a forefather of Amulek, a missionary. In the Book of Mormon, Aminadi, an ancestor of Ishmael, is noted for interpreting writing on the wall of the temple, penned by the finger of God.

According to Bradley, the portion of the first 116 pages lost by Harris was much larger than what we would conceive as 116 pages today. The type of paper that was used to transcribe was roughly 13 by 17 inches. Also, through research of the various transcribers used by Smith and estimates of time spent and what could be accomplished, Bradley posits the possibility that the "116 pages" are at least 200 pages, and possibly as many as 300. The author devotes a section on potential thieves of the manuscript. He assigns a low possibility of guilt to Harris' wife, Lucy, who has often been blamed for the theft in Mormon lore.

Bradley's research is impressive. The book is heavy with footnotes, some dominating pages. Sources include Lucy Mack Smith's recollections, as well as a critical edition of same edited by historian Lavina Fielding Anderson. There arevarious 19th century published accounts of the translation from persons close to those involved. Also, the author draws parallels to events depicted or hinted at in the Book of Mormon to similar events or religious rituals depicted in The Bible.

A final note: I have noticed in conversations with friends about this book a distinction in reception. Some members seem interested, and even excited. Other members seem more reserved, even skeptical of the attempt. Granted I have only a few to several subjects, but I wonder if some members feel that the lost 116 pages should remain a great mystery, and not the subject of scholarly speculation. Is it a cultural issue?

As for me, I think it's a great, fascinating read. You can buy it from the publisher here, or via Amazon here.
Posted by Plan9Crunch at 10:42 PM