John C. Bennett was the Lucifer of early Mormonism 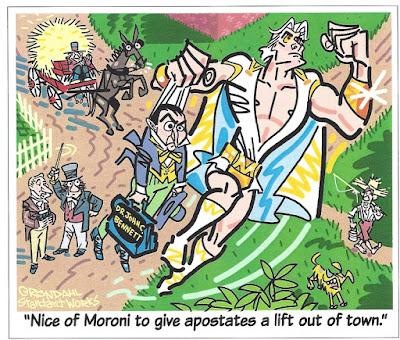 John Cook Bennett: most Mormons probably know him from LDS Church Almanacs as “assistant president of the LDS Church” for a year or so during the Nauvoo era. Those who know a bit more about church history know him as a proclaimed “Judas,” or “Lucifer,” who slithered into Nauvoo, deceived the Prophet Joseph Smith, seduced several women, married and single, was cast out, then made considerably more than 30 pieces of silver vilely blasting Smith at lectures and in a best-selling book.

Bennett was so anathema to LDS Church leaders that in response to his death in 1867, an LDS Church publication released a scathing, false obituary which read, in part, “… He dragged out a miserable existence, without a person scarcely to take the least interest in his fate, and died a few months ago without a person to mourn his departure. …”

In reality, Bennett died in Polk City, Iowa, a fairly well off and respected man. He had recently served as surgeon in the Third U.S. Infantry during the Civil War. Yet, the Mormons’ loathing of Bennett was not without cause. Despite Bennett’s many talents and skills, he was often a scoundrel during his life. He was a serial adulterer and grifter at times, selling “diplomas” from a medicine school diploma mill. He may have even been a sociopath, albeit one who could remain fairly prosperous even after alienating many.

I was surprised to discover a biography of Bennett’s life, “The SaintlyScoundrel: The Life and Times of Dr. John C. Bennett,” by Andrew F. Smith, published in 1997 by University of Illinois Press. It’s an interesting read. Bennett, born in 1804, grew up in southeastern Ohio and became a doctor in the early 1820s, learning medicine from his uncle, a prominent doctor and scientist. After marrying, Bennett practiced in several different areas and also was a lay preacher, favoring the reformist Campbellite doctrines. In fact, he had already met many prominent Mormons long before moving to Nauvoo.

Bennett enjoyed teaching and lecturing in medicine, and he tried setting up colleges and medical schools in several frontier states. This is also where much of his grifting began. At one college, Christian College, Bennett was hounded out by peers for blatantly selling diplomas. In fact, as author Smith surmises, Bennett may have been the first man to ever set up a diploma mill.

In the early 1830s, Bennett gained some prominence by touting the supposed health benefits of tomatoes, a fruit that many Americans didn’t eat at that time. Although Bennett’s and others’ claims about the healing powers of tomatoes were wildly overstated, for scores of years tomato pills, etc., were popular. Bennett also was an early advocate of Chloroform as a sedative for operations, although ether would prove to be a better alternative. During the 1830s, Bennett’s marriage collapsed due to his infidelity and allegations of spousal abuse.

His tenure as a Mormon leader, and its aftermath, is what Bennett is best known for. He ingratiated himself with Joseph Smith and into the highest levels of the Mormon Church, serving as mayor of Nauvoo, leader in the military Nauvoo Legion, town doctor, lobbyist for the city, and assistant president of the LDS Church. Like much of Bennett’s life, though, it was a short rise and fall. By his own admission, Bennett engaged in several affairs with Nauvoo woman. Whether the Mormon prophet Joseph Smith was a participant with Bennett in this behavior is debated. At the time, the Mormon doctrine on polygamy was being taught in secret. Did Bennett try to convince women to marry Smith? Given his past, it’s likely Bennett exploited the issue for his carnal pleasure. Whatever the circumstances, the scandals roiled the Mormon Church.

Among the women reviled for their charges against Smith and Bennett were Sarah Pratt, Nancy Rigdon and Martha Brotherton. LDS leaders Sidney Rigdon, George Robinson and Orson Pratt publicly opposed Smith amid the charges of adultery, fornication, “spiritual wifery” and abortion.

What’s clear is that after Bennett was kicked out of Nauvoo, he was angry enough to turn his claimed betrayal by Smith and Mormon leaders into a cottage industry where he lectured against the Mormons in major cities, wrote articles for newspapers calling for Smith’s arrest, and penned a best-selling novel, “The History of the Saints.” As a professional anti-Mormon, author Smith recounts that Bennett was often greeted with skepticism even by enemies of the church. Derided was his claim that he had never embraced Mormonism, but had infiltrated Nauvoo to expose the wickedness of “Joe Smith” and the church.

Smith recounts a final episode in Nauvoo — after Bennett had turned anti-Mormon — where Bennett went to Joseph Smith’s store and paid a longstanding debt. It’s an interesting anecdote that invites speculation that Bennett may have asked Smith for another chance. In any cases, neither the Mormon prophet or Bennett left a written record of the encounter.

Not many know that Bennett, a few years later, rejoined an offshoot of Mormonism, entering the hierarchy of James J. Strang’s church in Wisconsin. Not surprisingly, Bennett was eventually kicked out of Strang’s church but later, Strang — who was eventually assassinated — embraced polygamy. It’s possible that Bennett, tomcatting as usual, swayed Strang toward polygamy. With Strang, Bennett also helped set up a secret “Order of the Illuminati” within that church.

In his post-Nauvoo years, Bennett married a second time and as he got older, his life became less controversial and more sedate. He gravitated toward Iowa and gained a measure of fame for his work breeding chickens. He wrote a well-received book, “The Poultry Book,” that was very popular. Bennett was fortunate, as he developed this interest in breeding during a “poultry craze” that swept the U.S. a decade prior to the Civil War. As Smith relates, Bennett gave a copy of the book to U.S. President Zachary Taylor, who thanked him for the gift.

Although a military surgeon for the North during the Civil War, Bennett’s health prevented him from full activity. His health failed rapidly in the middle 1860s and he died in August of 1867, soon after having a stroke, Smith surmises. A large, prominent grave in Polk City marks his final resting spot.